After celebrating a goal “at the death” in Friday’s game vs Bear River, the T-Birds came into Monday’s rival game against Provo with high hopes of a victory. Those dreams were quickly dashed as the Bulldogs took a 2-nil lead into half. Provo enjoyed possession, and took advantage of critical lapses in defense to score two goals in 5 minutes. The first came off a beautiful play in which Provo was awarded a corner kick from Timpview’s right corner. After the first player ran a “dummy,” the second made no mistake with his strike hitting the top right corner of Timpview’s net. Not to be out done by their first goal, Provo’s second was as cheeky as they come. A nice through ball that had some air under it, landed just outside the Keepers box, as Provo’s left wing and Timpview’s RB defender chased to get the first touch on the ball… Timpview’s Keeper charged in for possession and just as all three players were arriving at the ball, Provo’s #4 touched first and toed a lovely little chip shot, up and over the out stretched hands of Timpview’s keeper. Provo end the half as it started, in command.

Like Charles Dickens masterpiece “A Tale of Two Cities”, the second half belonged to Timpview. Coach Wheatley rallied his troops and coming out of the half, the team played with a passion, that Provo could not match. With the ball mostly played on  Provo’s side, Timpview just looked more threatening. After a couple of  misses, the T-Birds found the net on a close range shot and 10 minutes later they were awarded a PK after a Provo defender took down one of our Mid-fielders in their box, and that took the score to 2-2. The game soon went in to OT, and after both sides took turns dominating each OT, neither sides chances touched the “back of the net”, and the game would be decided by PKs. Provo took advantage of their chances and finished off a valiant effort by our boys to complete the comeback. Final score was 2-2 with Provo winning in PK’s 4-2. 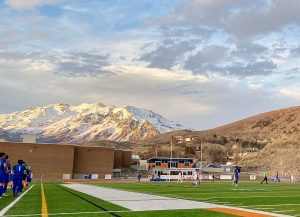