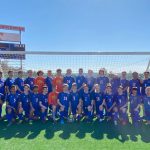 After celebrating a goal “at the death” in Friday’s game vs Bear River, the T-Birds came into Monday’s rival game against Provo with high hopes of a victory. Those dreams were quickly dashed as the Bulldogs took a 2-nil lead into half. Provo enjoyed possession, and took advantage of critical lapses in defense to score